When Running Department (aka RD ) first announced the collaboration with Japan Tourism Board (JTB) to organise a Kyoto Marathon 2019 trip, I indicated my interest without much thought, impulsively. However, the anxiety started building when the trip was confirmed and countdown began.

Heartfelt thanks to our RD folks, specially to Yew Meng and Raymond who shared so many insights on Kyoto marathon during our preparation. A big shout out to Abraham for leading us in this entire trip and managing all the logistics etc with JTB. His presence was so felt that we were named ” Abraham Group.”

And a big thanks to my trip roomie Alvin too for the last minute race gear check and advise to wear a top base-layer during the run to keep my body warm. That layer sure came in handy and I recommend everyone to remember this tip for running in cold weather.

Fast forward to the day we touched down in Osaka, we went straight to the race expo to collect our race pack in Kyoto. The race expo was very well organised. The queue for bib collection was short and it took us less than five minutes to complete the process.

Like most race expos, we had to walk through a long path decorated with sponsors and partner booths in order to exit from the race expo. The most interesting part of the race expo was the miniature layout ( click on the link to watch a video of the miniature food station taken by Alvin Tan ) of the food/drink support stations along the race route which allowed runners to plan re-fuelling with delicious food like croissants, red bean bun, rice crackers, oranges, strawberries etc. 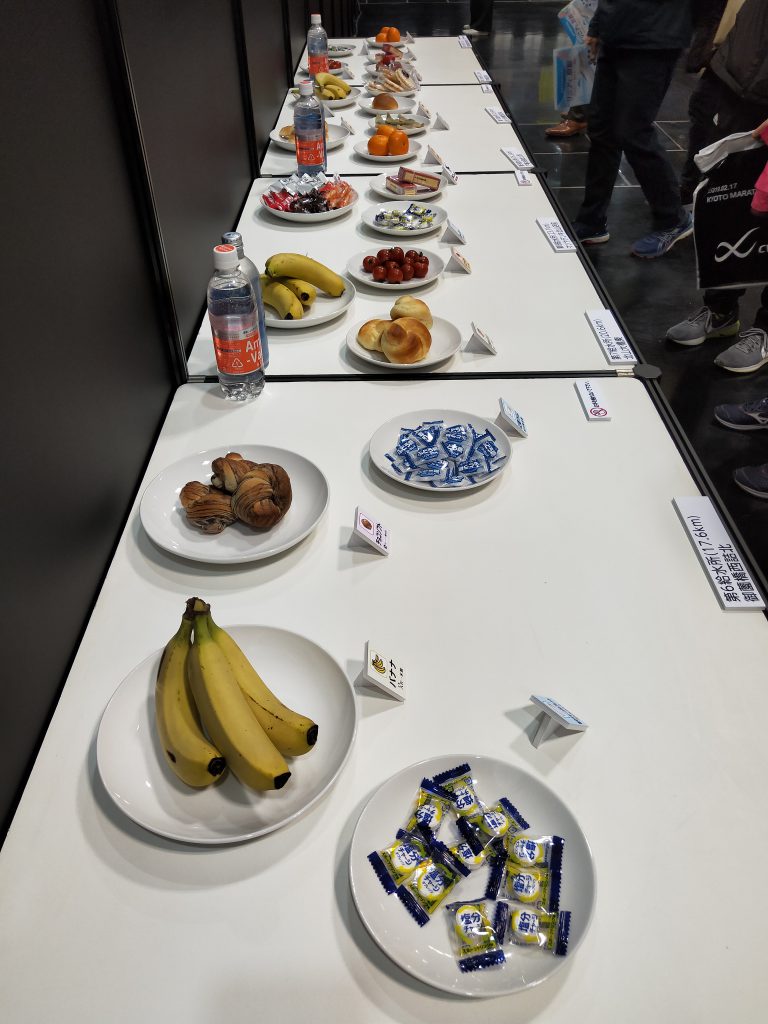 The night before the race after a flat lay photo and feeling like I had everything I needed for the race, I went to bed early. 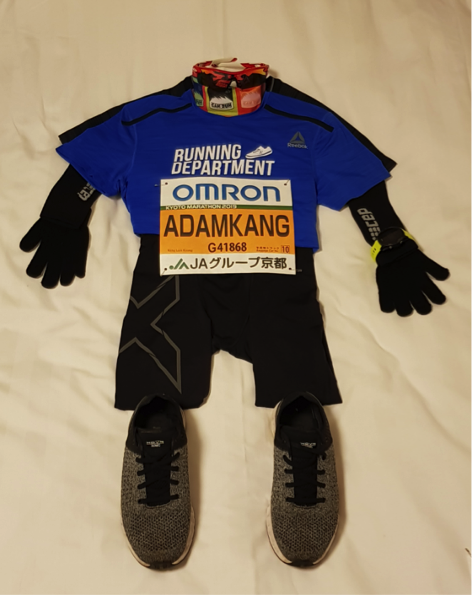 Finally the D-day arrived. Upon reaching the race site, we said goodbye to our RD support group. Our support group’s youngest member was 6 years old Bunny, whose mummy, without paying any money, got so many, baby sitters whilst she was running!!  Ok that was just a joke 🙂

There is reason why we call Running Department a family. We don’t just support each other during the race but in every phase. 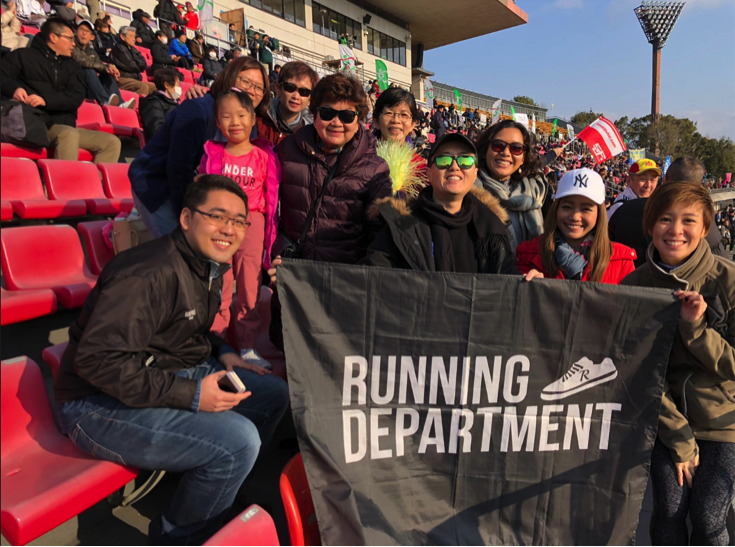 After good byes we started to gear ourselves up with ponchos/neck-scarf to fight against the cold weather and moved off to our individual starting pens. 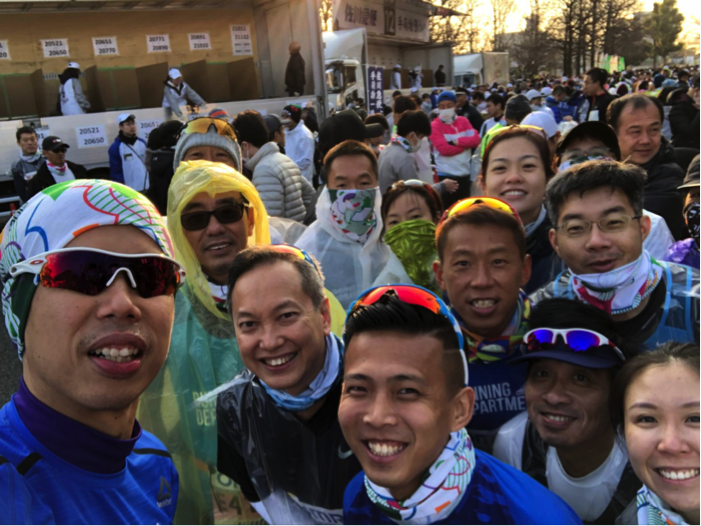 The entire race was very well organised and impressive except for one thing, when I was moving from the start pen towards the start line, I did not realise that I have crossed the start line until I noticed runners who were running like they do after crossing the start line. Perhaps a more clear start line with a proper flag off can be considered in future.

The race day weather was pretty cold around 5 degrees celsius but I managed to take off the poncho (given as part of the race pack item) at 4km mark as my body started to warm up. The first half of the route was also hilly with some lengthy inclines. It was extremely windy when running along the river banks. Contrary to my original belief cold conditions made me run better. Perhaps because as long as I was running my body was warm. Parts of the route where it was windy, the neck-scarf (thanks to Roy who gave one to me) helped as a wind blockage covering over my mouth while I used it as a headband on non-windy route. 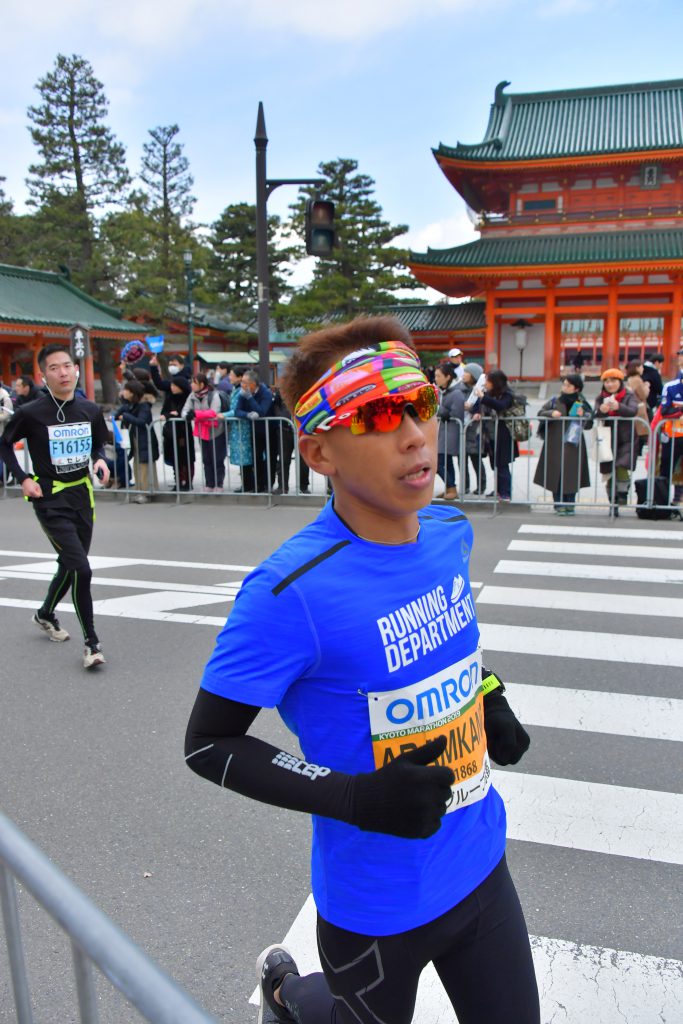 Seeing other RD runners along the route was a joy. 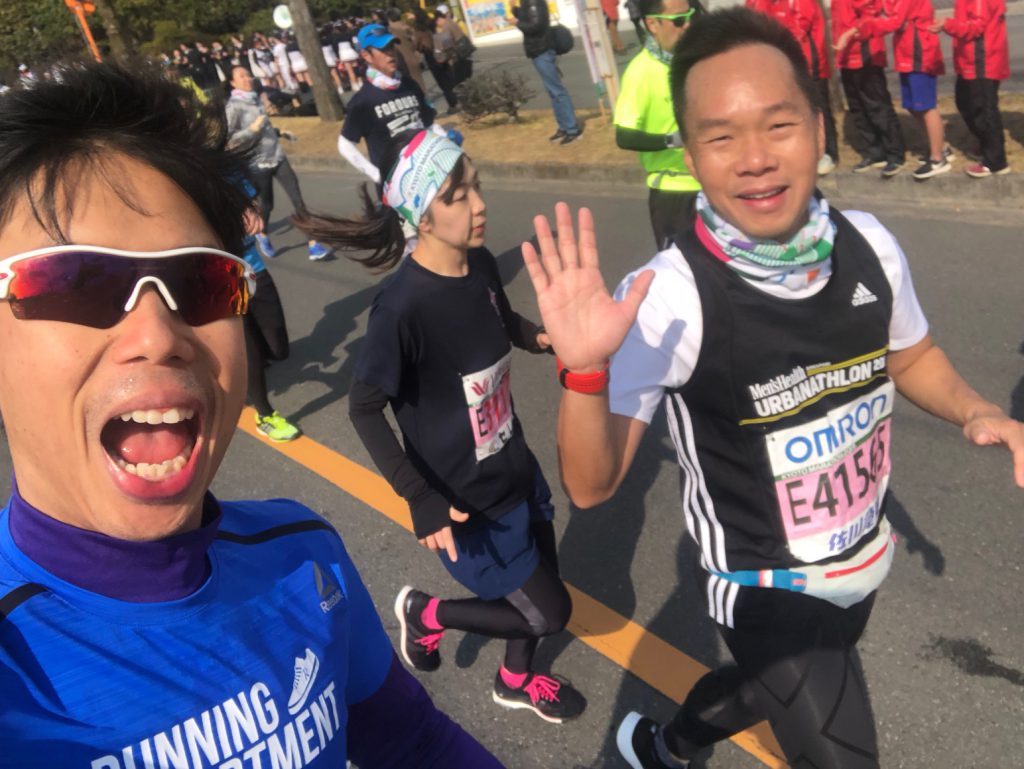 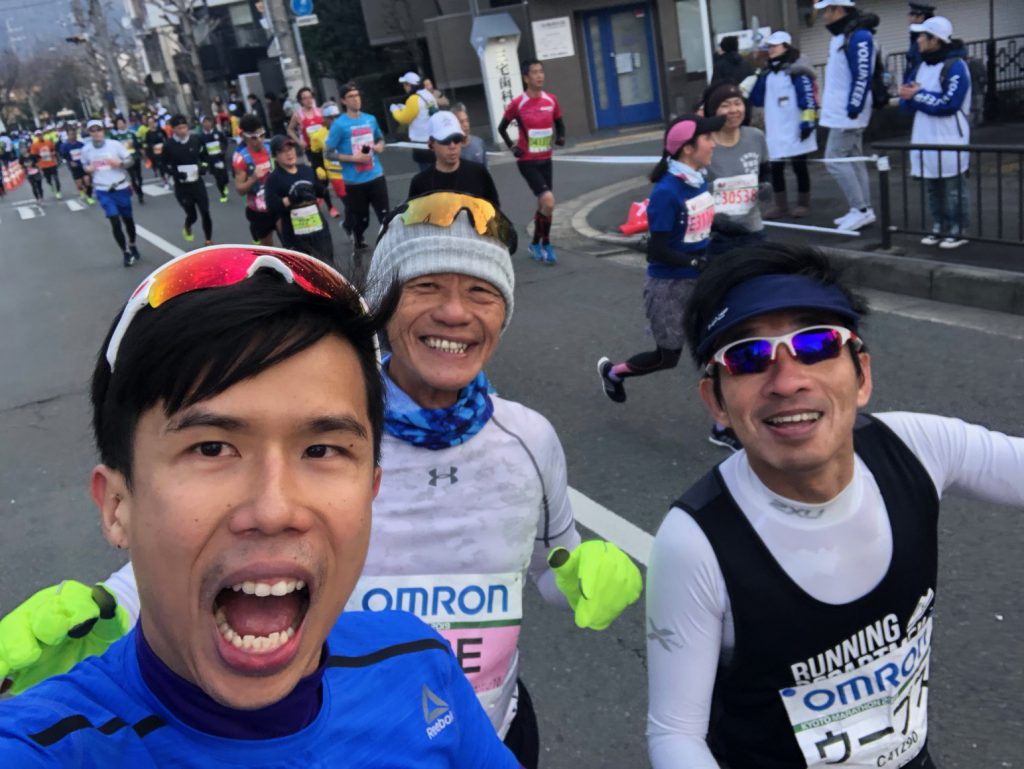 The race route was scenic with breath taking views. Having very supportive Kyoto residents cheering the runners along the route was encouraging. Little kids were shouting in their native Japanese language (I assume they were cheering in the Japanese version of .. “jia you” or “keep going”), cheer-leading performers, music/drum performers, Geishas and the most touching part was seeing the elderly sitting in wheel-chairs cheering the runners under such cold weather. 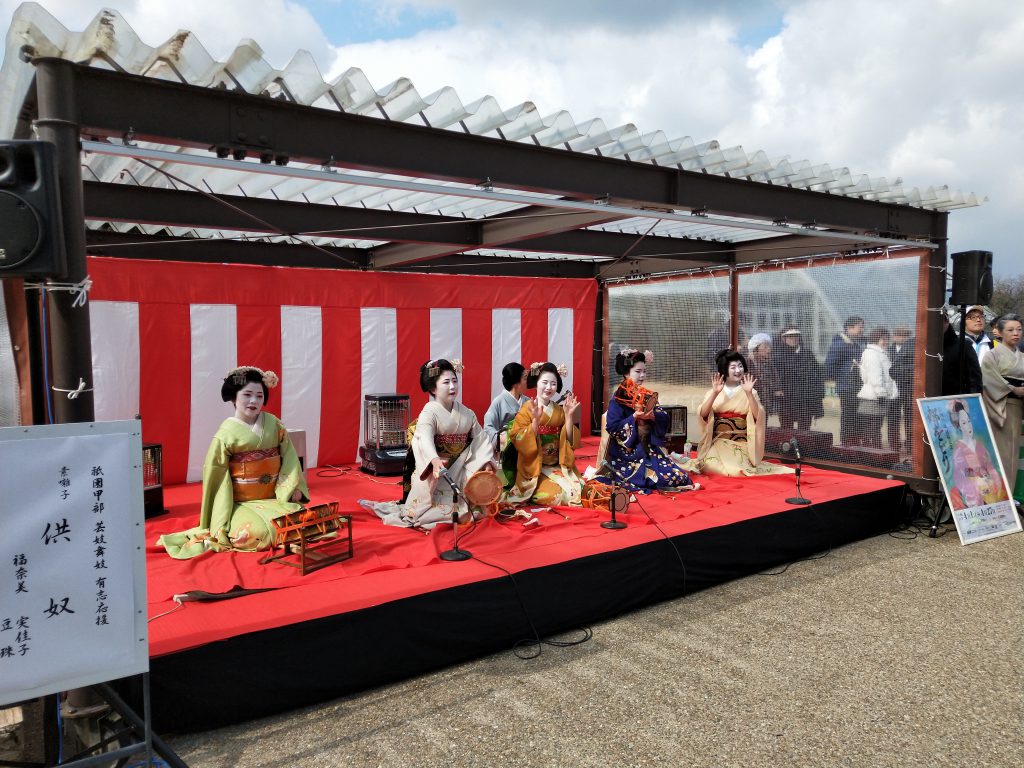 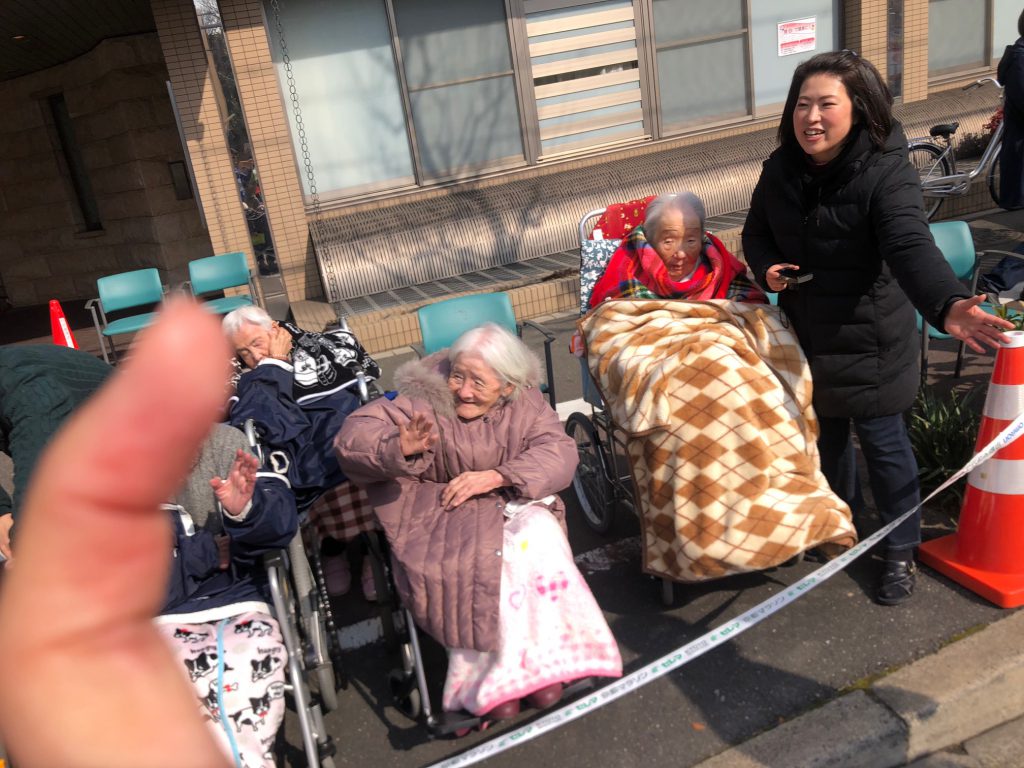 Not forgetting on the miniature food/drinks support stations from the race expo, I managed to grab some cherry tomatoes, oranges and strawberries along the way to refresh myself. No regrets on these stop-overs as the fruits are so fresh and sweet. 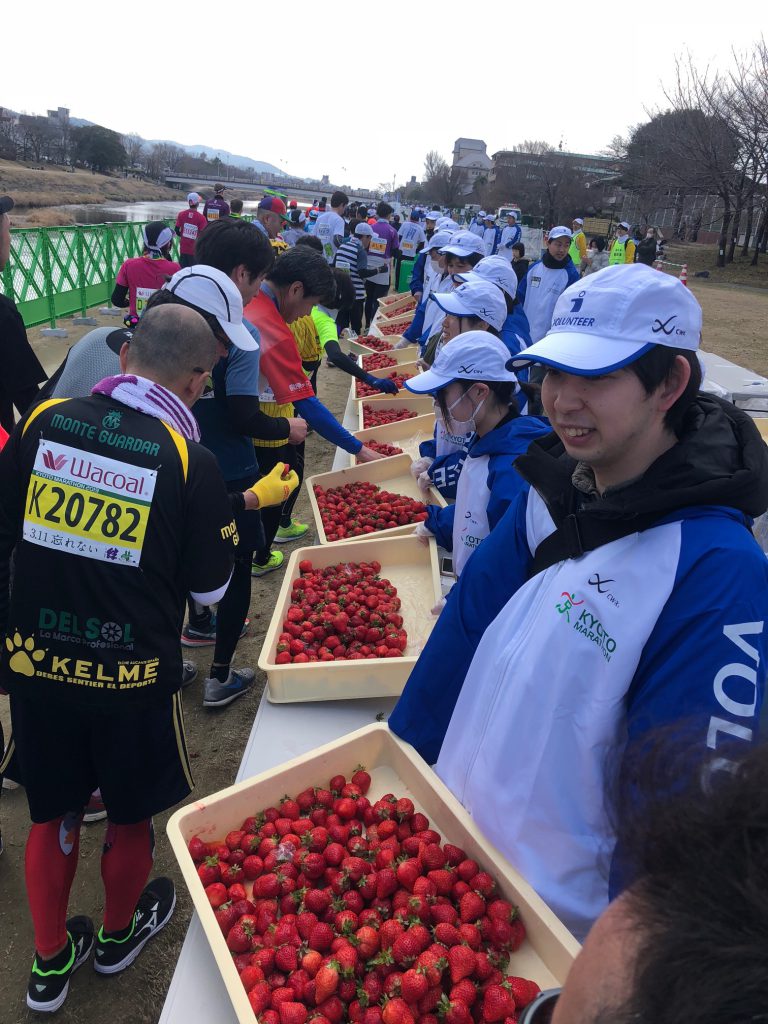 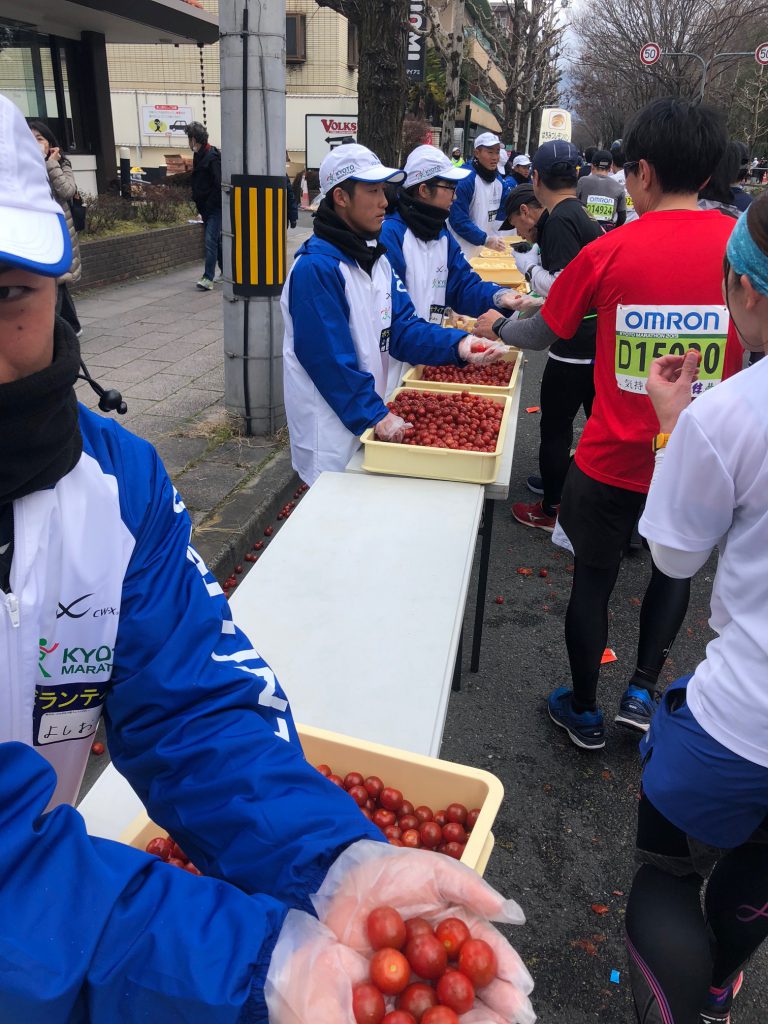 However, I did not stop for the croissant or red bean bun stations (although it was highly recommended as one of the key stop-over) as I did not want to  risk running with a bloated tummy. 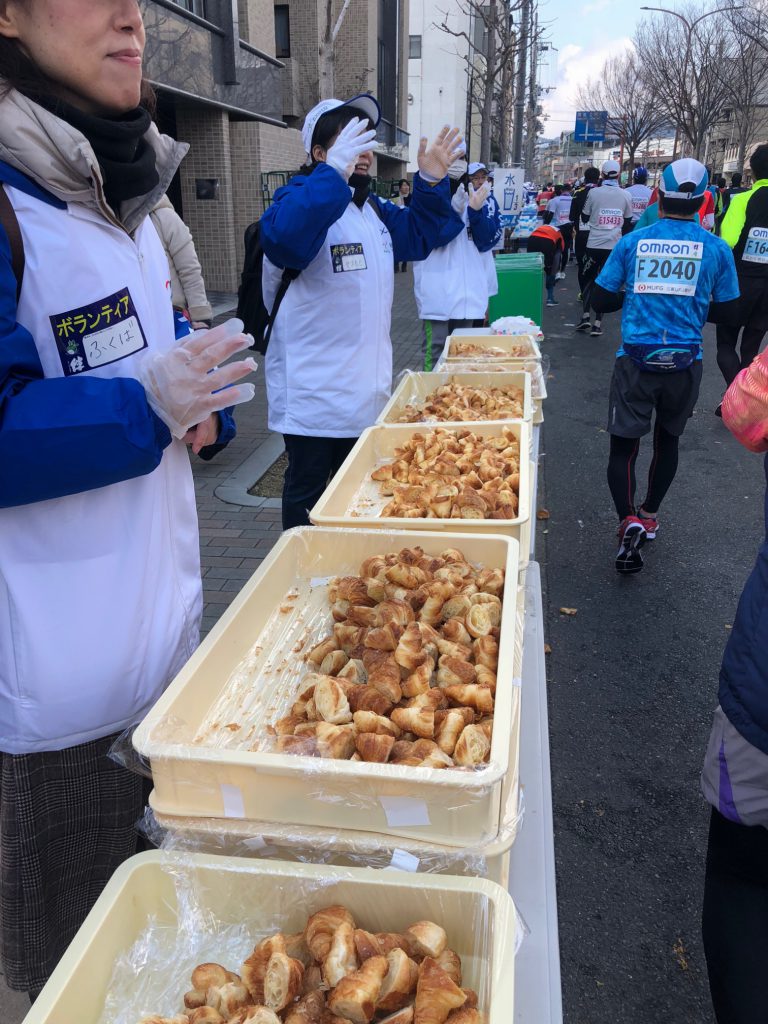 Another impressive feature to mention for this race was that the organiser had set-up big signboards informing runners on the distance markers to the next toilet station and the number of cubicles which are being set-up.

After many u-turns, left turns and right turns, I was super delighted to see the 40km distance marker. I started to pick up the pace, striking out a wider step forward and finally crossed the 42.195km finishing line with a personal best timing. 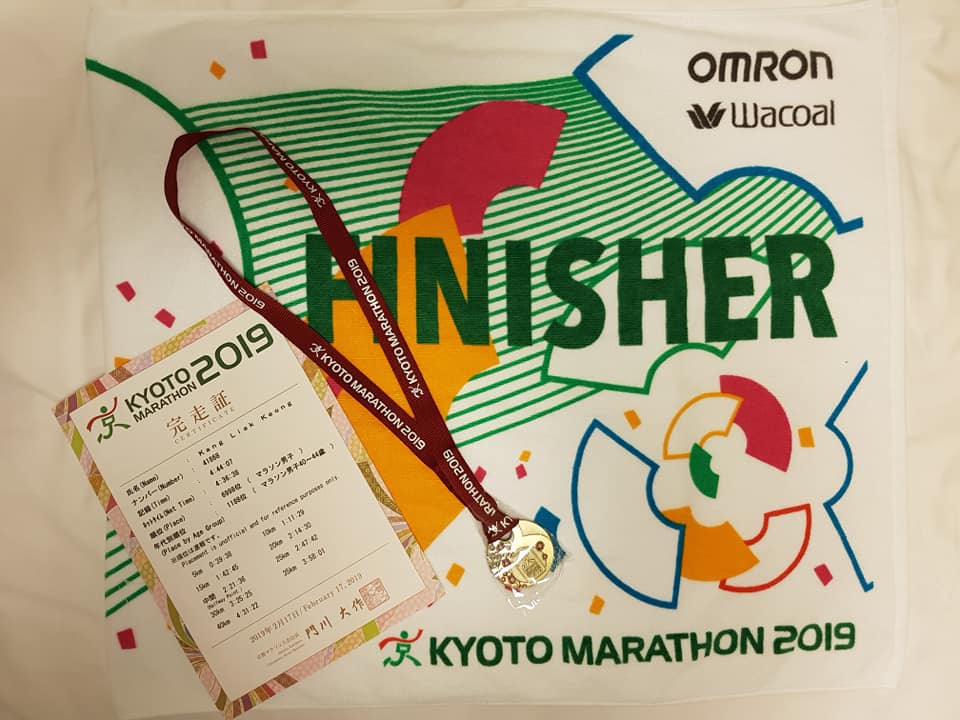 After which the next stage of marathon continued… I mean the food marathon with my fellow RD runners and supporters.

Arigatōgozaimashita for being on the journey to Kyoto with us!

"Other than running, Adam is also a great lover for vitamin D (aka sun) and will always make time for the free flow of vitamin D in-take whenever there is an opportunity. May the DARK force be with him..."
Tagged under: Running Department 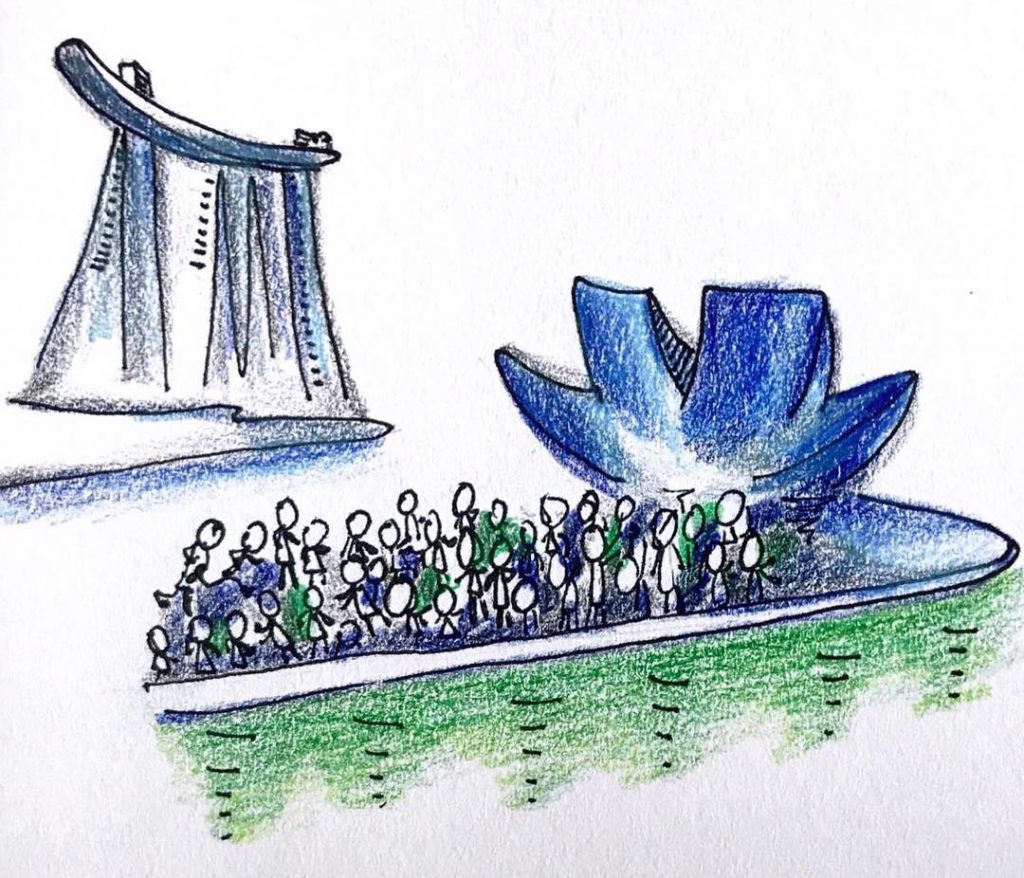 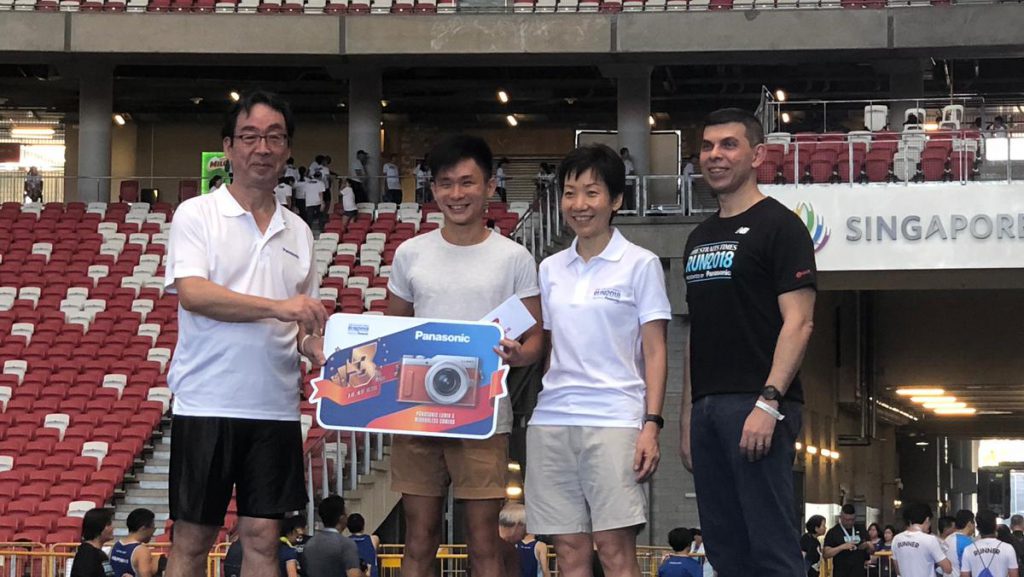 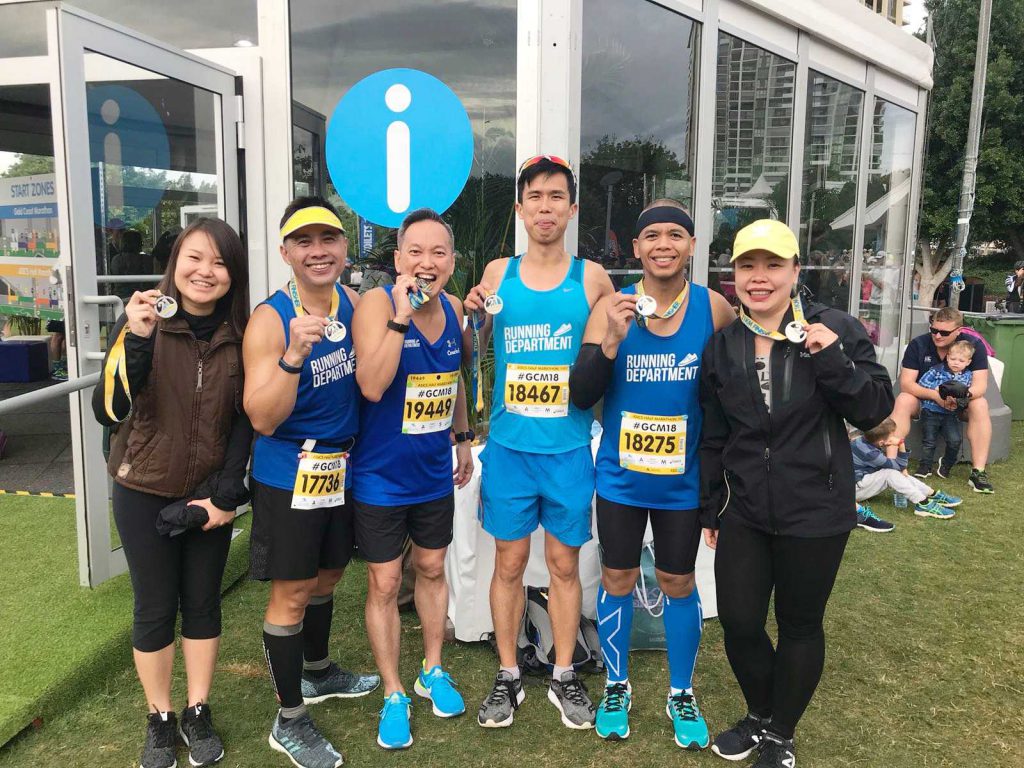